Helping Those with Alzheimer’s and Helping Find a Cure 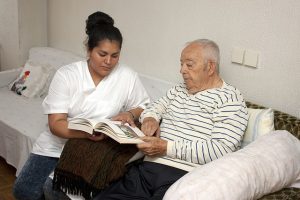 November is National Alzheimer’s Disease awareness month, a designation made official by President Ronald Reagan in 1983. Since that time, the number of people diagnosed with Alzheimer’s has grown from under 2 million to over 5 million, and the number is growing every day. By talking about the disease, educating people on the symptoms and supporting caregivers, in this month and every month, we can help improve the quality to live for those with Alzheimer’s and their families.

More than three decades after Reagan acknowledged the importance of raising awareness of the disease, we have come a long way in understanding it better. While there is no cure for Alzheimer’s, much progress has been made in researching the disease and finding new treatments to help lessen the symptoms, thanks in part to a growing awareness.

 In the 1990s new drugs became available, such as Aricept, to help treat symptoms of Alzheimer’s disease. Thanks to research begun as early as 1983, these drugs help prevent the breakdown of a chemical in the brain that is important for memory and thinking. New treatments are constantly being trialed to find even better drugs for treating Alzheimer’s.

 New types of therapy, such as the storytelling program at Northwestern’s Cognitive Neurology and Alzheimer’s Disease Center, help patients and families learn better ways to cope with the disease.

 Just this summer, researchers discovered “tau tangles” in the brain of an Alzheimer’s patient, which could ultimately lead to a new era of drug design for the disease.

All of this news and the continued research into Alzheimer’s brings a lot of hope to everyone who is dealing with Alzheimer’s in their family. But we realize that the possibility of a cure that is probably still years down the road is of little comfort for those facing the challenge now. That’s why it’s important to reach out. In addition to celebrating how far we’ve come, it’s just as important this month to show your support for the caregivers. Reach out, offer your time, and be there for the caregivers to talk to and share their struggles.

Contact us, or call Piedmont Home Care today at (336) 724-1197 to see how we can help ease your burden, and provide the support needed to keep everyone safe and happy.